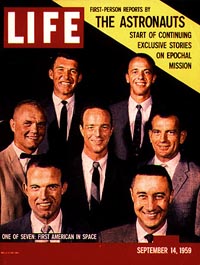 NASA announces the selection of the United States’ first seven astronauts, Scott Carpenter, Gordon Cooper, John Glenn, Gus Grissom, Wally Schirra, Alan Shepard, and Donald Slayton, The seven were chosen from 110 applicants to participate in the Mercury program, the nation’s first manned space program. The news media quickly dubs the group the “Mercury Seven.” On May 5th, 1961, Shepard will become the first American in space during the flight of Freedom 7.