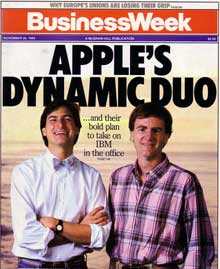 John Sculley is named president and CEO of Apple Computer after Steve Jobs convinced him to leave his position as president of PepsiCo. While Steve Jobs wanted the position of president for himself, then-CEO Mike Markkula did not think Jobs was ready to take on that responsibility.

Jobs wanted Sculley based on his success growing Pepsi’s marketshare against Coke. He wanted that same type of marketing success for Apple against IBM. Part of computer industry lore, Jobs reportedly asked Sculley, “Do you want to sell sugar water for the rest of your life or do you want to come with me and change the world?”

Ultimately, Sculley and Jobs entered into a power struggle, Sculley convinced Apple’s board of directors to strip Jobs of all power within the company, and Jobs left Apple. One has to wonder how the computer industry would be different today if Steve Jobs had been given lead of his company in 1983 instead of Apple opting for “adult supervision”. Recent history with companies such as Facebook, Google, and even Apple since Jobs’ return, has shown that visionaries can make great leaders of technology companies.