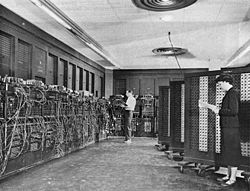 Researchers at the University of Pennsylvania begin work on the Electronic Numerical Integrator and Computer (ENIAC), which when completed, will become the first general-purpose fully electronic computer, capable of making calculations one thousand times faster than any other prior computer. The work will be carried out in secret since the computer is intended for military purposes, though it won’t actually be completed until after World War II ended. ENIAC will be unveiled to the public in February 1946.