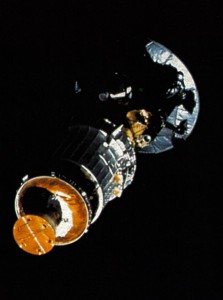 After fourteen years in space, eight of those as the first man-made object orbiting Jupiter, the unmanned NASA spacecraft Galileo is sent into the atmosphere of the giant planet. NASA decided to end Galileo’s mission in this manner in order to avoid any possibility of it colliding with one of Jupiter’s moons and potentially contaminating it with bacteria from Earth. How sanitary of them.