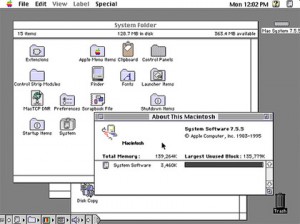 The System 7 operating system for the Macintosh is released, the second major upgrade to the Mac OS. One of the major features included in System 7 is built-in cooperative multitasking. System 7 also introduces the concept of “aliases”, which will later be copied as “shortcuts” in Microsoft Windows 95. System 7 was the first Mac OS that I personally became familiar with, and it was the foundation of the Mac OS until the release of Mac OS X almost exactly 10 years later.