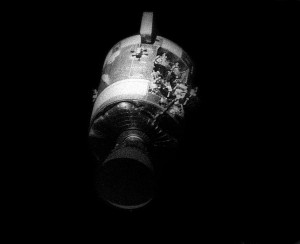 An oxygen tank aboard the Service Module of Apollo 13 explodes. Moments later, astronaut Jack Swigert announces the later-famous phrase, “Houston, we’ve had a problem here.” The explosion cripples the spacecrafts, resulting in a near-complete loss of electricity and oxygen. The oxygen leak will force the crew to abandon the command module for the lunar module as a makeshift “lifeboat” becoming stranded for four days, more than two hundred thousand miles from Earth, while NASA plans the most spectacular rescue mission in U.S. space history. Against all odds, the three astronauts will return safely back to Earth.