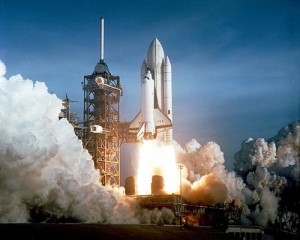 NASA launches the first Space Shuttle mission, STS-1, sending the Columbia on its maiden voyage. This mission intended to prove the feasibility of the Space Shuttles in specific, and reusable spacecraft in general. Originally set to launch on April 10th, problems delayed the launch by two days, which caused the launch to occur exactly 20 years after Yuri Gagarin became the first man to fly into space.