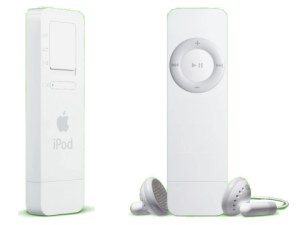 Apple introduces the iPod Shuffle, the first iPod to use flash memory and the smallest iPod made to date. The small size and low cost of the iPod Shuffle proved popular, as Apple sold 10 million iPod Shuffles by September 2006. It also paved the way for future flash-based iPods, which have now become more common than hard drive based units.