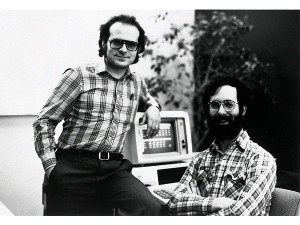 Dan Bricklin and Bob Frankston, developers of the world’s first spreadsheet software, incorporate Software Arts to be the parent company for their product, VisiCalc. VisiCalc was introduced and then shipped later in the year and became the first “killer app” for the personal computer. By offering such a powerful business tool that anyone could run on their own computer, Bricklin and Frankston are credited with changing the perception of the personal computer from hobby into a business machine.