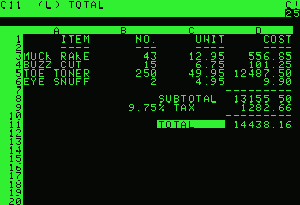 At the West Coast Computer Faire, Harvard MBA candidate Daniel Bricklin and programmer Robert Frankston give the first demonstration of VisiCalc, the original spreadsheet software. First released for the Apple II, VisiCalc made a business machine of the personal computer. VisiCalc was a huge success, selling more than 100,000 copies in the first year. VisiCalc also spurred the sales of the Apple II, as people would buy the Apple II just to run VisiCalc. Overall, the spreadsheet validated the usefulness of the home computer and was likely a major factor for IBM accelerating their entry into the PC market.