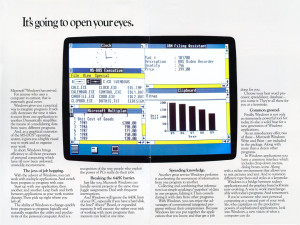 Two years after initially being announced, Microsoft finally ships the first version of Windows. Originally slated to be shipped in April of 1984, the long delay caused skeptics to began to accuse Windows of being “vaporware”. Due to the relatively high demands of then-current PC technology, Windows 1.0 was generally considered too slow to be usable. It wasn’t until Windows 3 that the operating system began to generate significant sales.