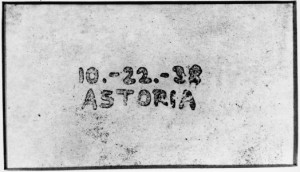 In a makeshift lab on the second floor of a rental house, Chester Carlson and his assistant Otto Kornei successfully invent the process that would lead to the photocopier. Carlson had written “10.-22.-38 ASTORIA” on a piece of paper and these became the historic words that were the first photocopied. Ironically, Kornei had so little faith in the invention that within a year he quit working for Carlson and willingly gave up any claims he had on the process. However, Carlson would later gift Kornei 100 shares of the Xerox corporation that would eventually be worth $1 million.