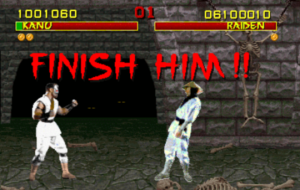 The video game Mortal Kombat is released into arcades. Now one of the most popular fighting game series in history, the original Mortal Kombat became well-known for its graphic display of blood and deadly finishing moves known as “fatalities”. As often happens in situations like these, the controversy surrounding the game only served to fuel its popularity.

I remember the game becoming popular on the heels of Street Fighter II. I never really liked the game because I felt it was all flash and no substance. And the martial arts techniques portrayed were often really bad. But it was occasionally fun to knock someone’s head off.