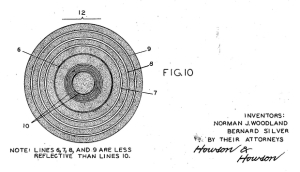 American inventors Norman Joseph Woodland and Bernard Silver are granted US Patent #2,612,994 for “Classifying Apparatus and Method,” described as “article classification through the medium of identifying patterns.” Of course, today we better know these “identifying patterns” as barcodes. Woodland and Silver eventually sold their patent for only $15,000 but were later inducted into the Inventors Hall of Fame.

Barcodes were first used commercially in 1966 and it rapidly developed that eventually by 1970, there was a requirement to have some sort of industry standard set. A company called Logicon Inc. created the Universal Grocery Products Identification Code or UGPIC for short in order to implement the barcode throughout the retail industry.

Monarch Marking, based in the United States of America, was the first company to produce barcode equipment using UGPIC for retail trade use. British company, Plessey Telecommunications followed suit, creating their equipment later in the same year.

The UGPIC was transformed into UPC, or Universal Product Code symbol set, which is still used in the United States of America. The first piece of equipment using UPC was installed in a Marsh’s supermarket in Ohio and the first product checked out using a barcode was a packet of Wrigley’s Juicy Fruit Chewing Gum on June 26, 1974.

Special thanks to Jonny Rowntree of Elanders UK for sending me the background information for this article!