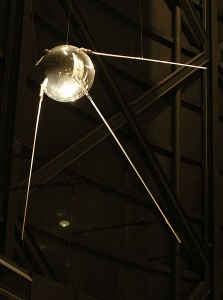 The first man-made satellite to orbit the Earth, Sputnik 1, is launched from Baikonur, Kazakhstan, marking what is now considered the beginning of the Space Age. Surprising the world with its successful launch, Sputnik triggered the Space Race between the Soviet Union and United States ushering in an era of rapid advancement in the field of space exploration. After 3 months in orbit, Sputnik reentered the Earth’s atmosphere and burned up on January 4, 1958.