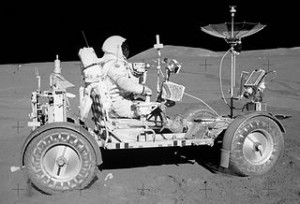 Using the battery-powered Lunar Roving Vehicle (LRV), Astronaut David Scott of the Apollo 15 mission becomes the first person to drive a vehicle on the Moon. The LRV was used during the last three missions to the Moon, Apollo 15, 16, and 17. The three LRVs used during the missions still remain on the surface of the moon.