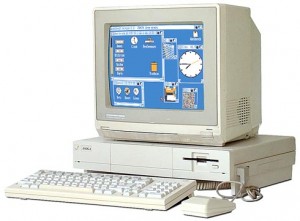 Commodore introduces its Amiga personal computer, also known as the Amiga 1000 or A1000. Featuring a multitasking, windowed operating system, color graphics, and stereo sound among other features ahead of its time, the Amiga developed a loyal user following that remained strong even as the PC market became increasingly consolidated between the dominant IBM-compatible PCs and Apple Macintosh computers.

In 1994, Byte Magazine would write, “The Amiga was so far ahead of its time that almost nobody — including Commodore’s marketing department — could fully articulate what it was all about. Today, it’s obvious the Amiga was the first multimedia computer, but in those days it was derided as a game machine because few people grasped the importance of advanced graphics, sound, and video.”