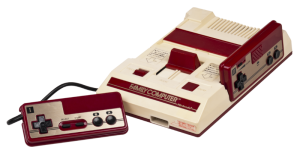 Nintendo releases their Famicom system, short for “Family Computer,” in Japan. The Famicom would be slightly modified with a copy protection system, a redesigned chassis, a front loading cartridge mechanism, and released in North America just over two years later as the Nintendo Entertainment System (NES). The Famicom/NES system would become one of the most influential game systems ever produced, making Nintendo the premier company in the video game industry during the late 1980’s and early 1990’s, picking up the mantle where Atari left off.