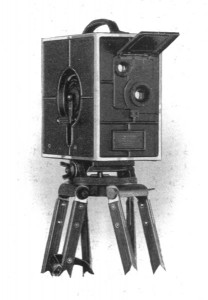 Kodak introduces the hand-cranked Cine-Kodak Model A, the first complete 16mm film system. 16mm film was developed to be an amateur alternative to 35mm film most often used by professionals. However, it found widespread use during World War II and later for television production, especially TV news. 16mm film is still in use today for certain applications.