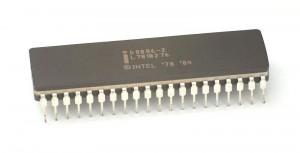 Intel introduces the 16-bit 8086 processor with clock speeds of 10, 8, and 5 MHz. The 8086 would become the basis for the series of processors used in “IBM Compatible” PCs and the x86  family (later marketed under the name “Pentium”) would dominate the market in the PC era. Ironically, however, it was the modified 8-bit 8088 processor that was used in the original IBM PC, primarily due to factors that would reduce overall cost. The current line of Intel “Core” processors are still based on the same architecture that was introduced with the 8086.