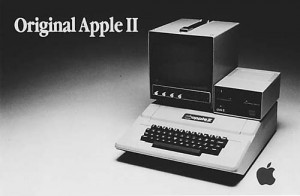 The original Apple II computer goes on sale. The Apple II featured an a 1MHz MOS 6502 processor, an integrated keyboard, a built-in BASIC programming environment, expandable memory (4K expandable to 48K), a monitor capable of color graphics, a sound card, and eight expansion slots. To include all these features in one discrete unit was highly innovative and the reason it is considered the first practical personal computer. However, in the spirit of the original computer hacker, the Apple II was also available as a circuit-board only, without keyboard, power supply, or case. A couple of years later, the combination of the Apple II series and the first “killer app” of the business world, the VisiCalc spreadsheet program, popularizes personal computers among business users. This sudden success of the “home computer” in the business world surprises established technology companies and eventually leads IBM to scramble to develop their IBM PC.