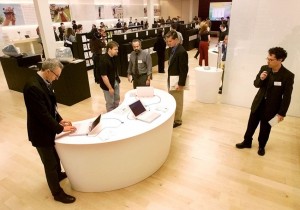 Apple Computer announces plans to operate a chain of retail stores, opening twenty-five retail stores in the United States by the end of the year. Steve Jobs holds a commemorative press event at Apple’s first store in the second level of Tysons Corner Center to make the announcement. The store, along with a second location in Washington, D.C. will open on Saturday, May 19. At the time, Apple’s plan was generally derided by technology “experts” as doomed to failure. On this, their anniversary date, Apple’s retail stores are now considered one of the catalysts to Apple’s tremendous growth.