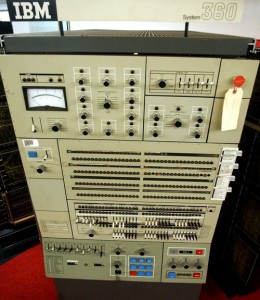 IBM launches the System 360 mainframe architecture, which comprised six compatible models complete with 40 peripherals. The line, dubbed the “360″ because it addressed all types and sizes of customer, cost IBM over five billion dollars to develop, and it is widely considered one of the riskiest business gambles of all time.

Up until this time, computer systems, even from the same manufacturer, were generally incompatible with each other. Software and peripherals from old systems would not work with new systems. This stifled acceptance and deployments of new systems as business customers were hesitant to lose their investments in their current systems. By developing a mutually compatible series of mainframes, customers were assured that their investments would not be lost if they purchased further System 360 models.

IBM’s gamble paid off handsomely, as in just the first three months of its release, IBM will receive US$1.2 billion in orders. Within five years, over thirty-three thousand units will be sold, popularizing the concept of a computer “upgrade” around the world. The 360 family was the most successful IBM system of all time, generating in over US$100 billion in revenue through the mid-1980’s. It became the basis for all sequent IBM mainframe architectures, which will hold a 65% marketshare in the 1990’s.

The 360 architecture also introduced a number of industry standards to the marketplace, such as the worldwide standard of the 8-bit byte. Its enormous popularity catapulted the business world into the technology age and transformed the computer industry. Not bad for a bunch of suits.