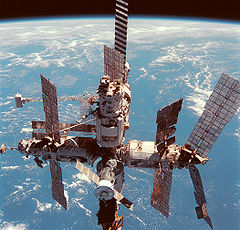 The Russian space station Mir burns up in the Earth’s atmosphere after fifteen years in orbit. The debris that isn’t burned up falls safely into the Pacific ocean between Chile and New Zealand, in a region from which governments had routed planes and ships away. The station, which was launched in 1986, far exceeded its intended lifespan of five years.