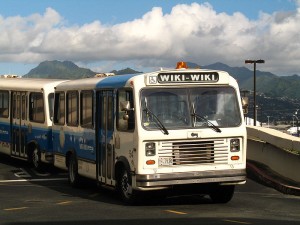 The worlds first Wiki, WikiWikiWeb was created as Ward Cunningham invites people to add and edit content. A Wiki is a database that can be a community collaboration. Cunningham has said the inspiration for the name Wiki came from the Wiki Wiki Shuttle bus he learned of during a trip to Hawaii. Six years later, Wikipedia is launched, although Cunningham has no official involvement.