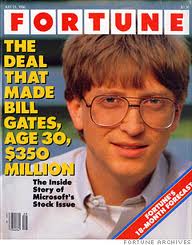 Ten years after the company’s founding, Microsoft Corporation stock goes public at $21 per share. The stock, which eventually closed at $27.75 a share, peaked at $29.25 a share shortly after the opening. It is said that the rising value of Microsoft stock has made an estimated 4 billionaires and 12,000 millionaires of Microsoft employees.