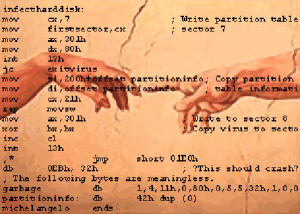 The Michelangelo virus, so-named because it activates on March 6, the birthday of Michelangelo, begins infecting computers. The virus will also make news in 1993. It was one of the earliest viruses to receive widespread media attention and also one of the first to prompt widespread hysteria. The irony of the name of the virus was that nothing in the virus’ code referenced Michelangelo. It is possible the virus author, who was never identified, did not know March 6th was Michelangelo’s birthday!