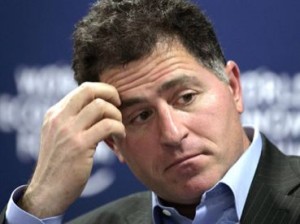 Michael Dell, founder and CEO of Dell Computers, announces that he will step down from his his CEO role while retaining his position as Chairman of the Board. Dell president and COO, Kevin Rollins will assume his role. On January 31, 2007, (about 1 year after Dell fell behind Apple in market capitalization) Rollins will resign and Dell will resume his role as CEO due to the poor performance of the company.