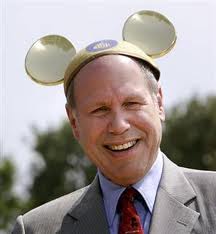 Disney CEO Michael Eisner testifies at a Senate Commerce Committee hearing in Washington, D.C., on the protection of digital content from piracy. Eisner lobbies for sterner enforcement of copyright laws, claiming that Apple Computer advertisements for the iPod encourage copyright violations. “Rip. Mix. Burn. … they can create a theft if they buy this computer.”

A little over 3 years later, Eisner was later replaced as CEO by Robert Iger, who quickly arranged the buyout of Pixar Animation Studios, of which Steve Jobs was CEO. This move made Steve Jobs Disney’s largest shareholder and a member of Disney’s board. I guess it’s a small world after all!