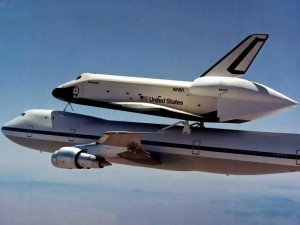 The Space Shuttle prototype OV-101, originally intended to be officially christened Constitution, was dubbed Enterprise following an overwhelming write-in campaign requesting it be named in commemoration of the fictional starship USS Enterprise NCC-1701 central to the 60s television show Star Trek. The completed craft was rolled out of Rockwell Internationals plant in Palmdale, California on September 17, 1977 to an audience of thousands along with Star Trek creator Gene Roddenberry and the majority of the celebrities from the original series.

The Approach and Landing Test (ALT) pictured occurred on February 18, 1977. Although unpowered, it is considered the maiden flight of the Space Shuttle design. The Space Shuttle Enterprise flew with a crew and under its own power for the first time on August 12, 1977.