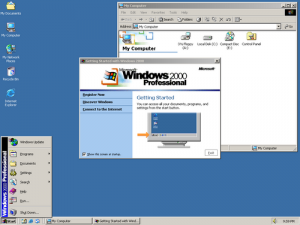 Microsoft introduces the latest version of the Windows NT line of operating systems, Windows 2000. While Windows 2000 did bring plug and play to the Windows NT line, it was targeted to the business market and not the consumer. It was not until Windows XP that Microsoft merged the NT line with the Windows 95/98 line. Unfortunately, Microsoft unleashed Windows ME upon unsuspecting consumers in the meantime. Sigh.