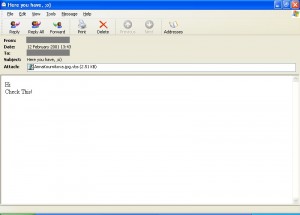 Jan de Wit sends out an email stating that it is a picture of the famous tennis player Anna Kournikova. Rather than being a picture of the Russian known more for her looks than her play (although she was ranked as high as #8 in the world in singles and #1 in doubles), it was a malicious script that tried to send itself to every address in a user’s address book and e-mail inbox (Windows users only, of course). The malware was so efficient, it was known to be spreading twice as fast as the “Love Bug” virus that devastated corporate networks a year earlier. The moral of the story is that men are easily manipulated.