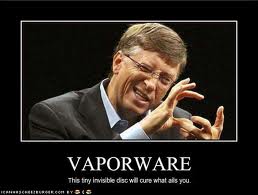 The term “vaporware” is first used by Philip Elmer-DeWitt in a TIME magazine article. The term is now commonly used to describe software that has been long announced but hasn’t actually been released. At the time, many experts believed Microsoft was guilty of using vaporware announcements to keep customers from purchasing software from other companies (by convincing them that a Microsoft version was just around the corner).