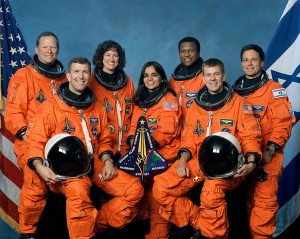 The Space Shuttle Columbia disintegrates during reentry into the Earth’s atmosphere, killing all seven astronauts aboard. The cause of the disaster was a piece of foam insulation the size of a small briefcase that broke off the external tank during launch and struck the leading edge of the left wing. This damaged the Shuttle’s thermal protection system (TPS), which protected it from heat generated by the atmosphere during re-entry. The damage allowed hot gases to penetrate and destroy the internal wing structure, resulting in the in-flight breakup of the Columbia.