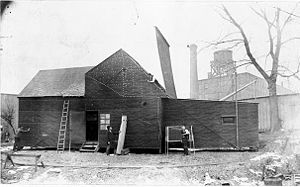 Thomas A. Edison finishes construction of the first motion picture studio, the Black Maria (officially known as the Kinetographic Theater) in West Orange, New Jersey. The name Black Maria came from a slang term for police wagons, also known as paddywagons, which were similarly cramped, uncomfortable, and dark.