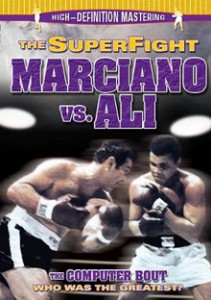 “The Super Fight“, a computerized, fictional boxing match between Muhammad Ali and Rocky Marciano “took place” today. The fictional fight was created by filming Ali and Marciano acting out every possible scenario in a fight and the result was then determined using probability formulas entered into a computer. The final fight was only shown once in 1500 cinemas around the world and later released as a DVD.