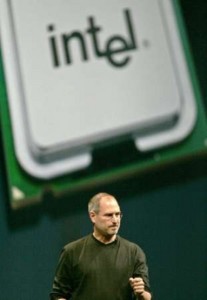 Seven months after announcing that Macintosh computers will transition from PowerPC to Intel, the first Apple computers to ship with Intel processors are released. The Intel-based iMac and MacBook Pro models will soon be followed by the rest of Apple’s Macintosh line in 2006. The importance of this transition can not be overlooked, as it enabled a level of compatibility with Windows computers never before  possible. Through virtual machine software or Apple’s later introduced Boot Camp technology, people could run Windows software directly on their Macs at the same speed as a Windows based computer. This effectively removed a huge roadblock many people had to owning a Macintosh computer, even if it was more of a psychological security-blanket for many.