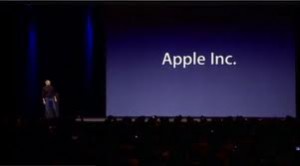 After introducing the iPhone, Steve Jobs announces that Apple Computer, Inc. has dropped the “Computer” from its official name and will now be known simply as Apple, Inc. This move is to signify that Apple has expanded their scope of products from what have been traditionally defined as computers. Still, old habits die hard and many people continue to add the “computer” part when talking about Apple.