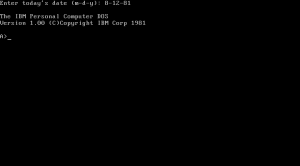 Microsoft shrewdly included a clause in the agreement that allowed them to sell the operating system to other companies under the name MS-DOS. It was this clause that changed the course of technology history, opening the door for Microsoft to become the dominant technology company of the PC era. Microsoft seemed to understand that by controlling the operating system, the underlying hardware became less relevant. IBM obviously did not consider this concept, nor did they foresee that companies would be able to successfully clone their hardware platform. Once companies were able to clone the hardware, they needed an operating system. Microsoft was more than happy to provide them with that operating system, which by design was completely compatible with IBM’s PC-DOS. Once IBM lost control of the platform they created, power shifted to the one major commonality between the IBM-compatible clones: Microsoft’s operating system. It was IBM’s name that pushed the IBM PC into prominence, but it was the combination of hardware cloning and Microsoft licensing the operating system that created the dominant platform of the PC era, crushing nearly all competing personal computer platforms in the process. Without this seemingly minor clause in this pivotal contract, the history of the PC era could have been quite different than it was.