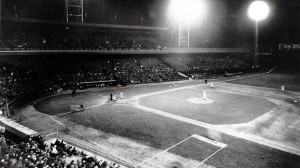 The first night major league baseball game is played in Cincinnati. The hometown Reds defeated the visiting Philadelphia Phillies 2-1. Night baseball caught on around the league very quickly – except for the Chicago Cubs, who didn’t play a home night game until 1988. Why am I not surprised? 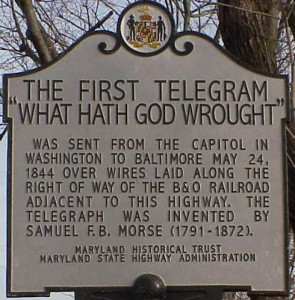 Samuel Morse sends the first telegraphic message over a line from Washington, D.C. to Baltimore. The message, “What hath God wrought!” was transmitted to his partner, Alfred Vail, who retransmitted the same message back to Morse. This formally opened America’s first telegraph line, launching America’s first form of instant communication in history. The biblical text was selected by Annie Ellsworth, the teenage daughter of the U.S. Commissioner of Patents. 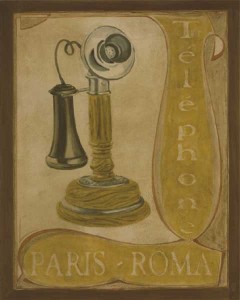 Paris, France and Rome, Italy are connected by telephone for first time. Feel free to congratulate me for finding this picture at any time. 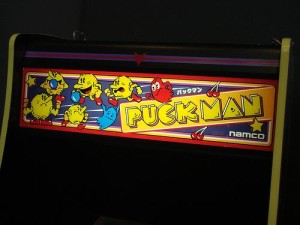 Puck-Man was the original name for Pac-Man

Namco’s upcoming game “Puck-Man” is location tested in a movie theater complex in Japan. After favorable initial testing, the game is slightly tweaked, with the most major change the renaming of the game to “Pac-Man”. Midway, Namco’s U.S. distributor, thought that vandals would alter the letter “P” to an “F”. While the game was not officially released until later in the year (October 10th in the US), the creators of the game consider May 22 to be Pac-Man’s birthday because it was the first time the game was shown to the general public.

One of the little known facts about Pac-Man is that it was specifically developed to be popular with women. Most video games of that time had a war or sports theme to them and women were generally not interested in those games. Pac-Mac would be the first game popular with both men and women and was the first video game to become a social phenomenon. Pac-Mac generated over $2.5 billion by the 1990’s, becoming one of the highest grossing video games of all time. 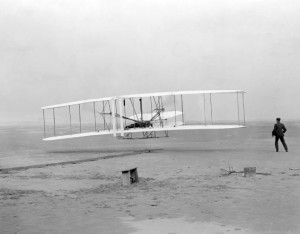 Orville and Wilbur Wright are granted the first airplane patent in the U.S. for their “new and useful improvements in Flying Machines.” (US No. 821,393) 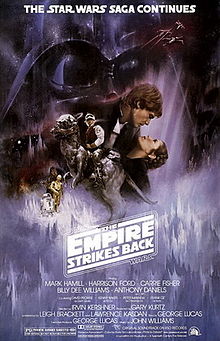 The sequel to the the smash success Star Wars, The Empire Strikes Back is released on this day, almost exactly 3 years after the release of the original film. The pioneering use of special effects technology in the Star Wars Trilogy transformed the movie industry. 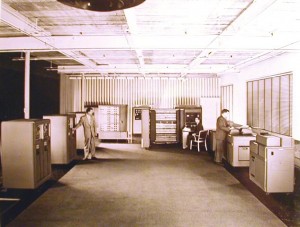 The IBM 701 was the company’s first commercial scientific computer, but I guess they figured that calling it a “calculator” would help it sell better. Perhaps they were right, because only expecting to sell five, the company ended up selling nineteen to government, large companies, and universities. 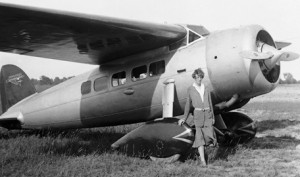 Five years to the day after Charles Lindbergh took off on his historic first solo flight across the Atlantic, Amelia Earhart takes off from Newfoundland. While her original destination was France, weather and mechanical problems force her to land in Ireland nearly 15 hours after she took off. She become the first woman and second person to fly solo across the Atlantic Ocean. 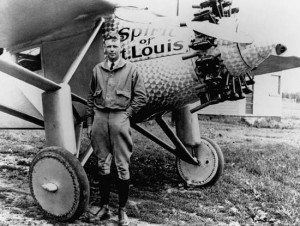 Aboard the “Spirit of St. Louis” monoplane, Charles Lindbergh takes off from Roosevelt Field in New York on his historic first solo flight across the Atlantic Ocean. He will arrive in France 33.5 hours later. 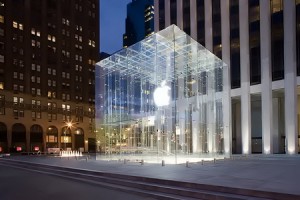 Apple opens their second store in New York City, a 20,000 square-foot shop at the underground concourse of the General Motors building at 767 Fifth Avenue. Open 24-hours a day, the shop is visible at street level through a 32-foot glass cube. Designed by Apple’s CEO Steve Jobs at a cost of $9 million, people stood on line for hours prior to the store’s opening.